POMPADOUR FROM THE KING OF ROCK’n’ROLL

Of course, now pompadour haircut quite differs from the first one. But the main features are still steady: different length of the sections in the central part and on the sides. Meanwhile, hairdressers are trying not just to keep hair volume but to maximally increase it. As you can see on the photo of the men`s hairstyles, hair is centered on the top. Such hairstyle can be made in our barber`s shop FIRM. 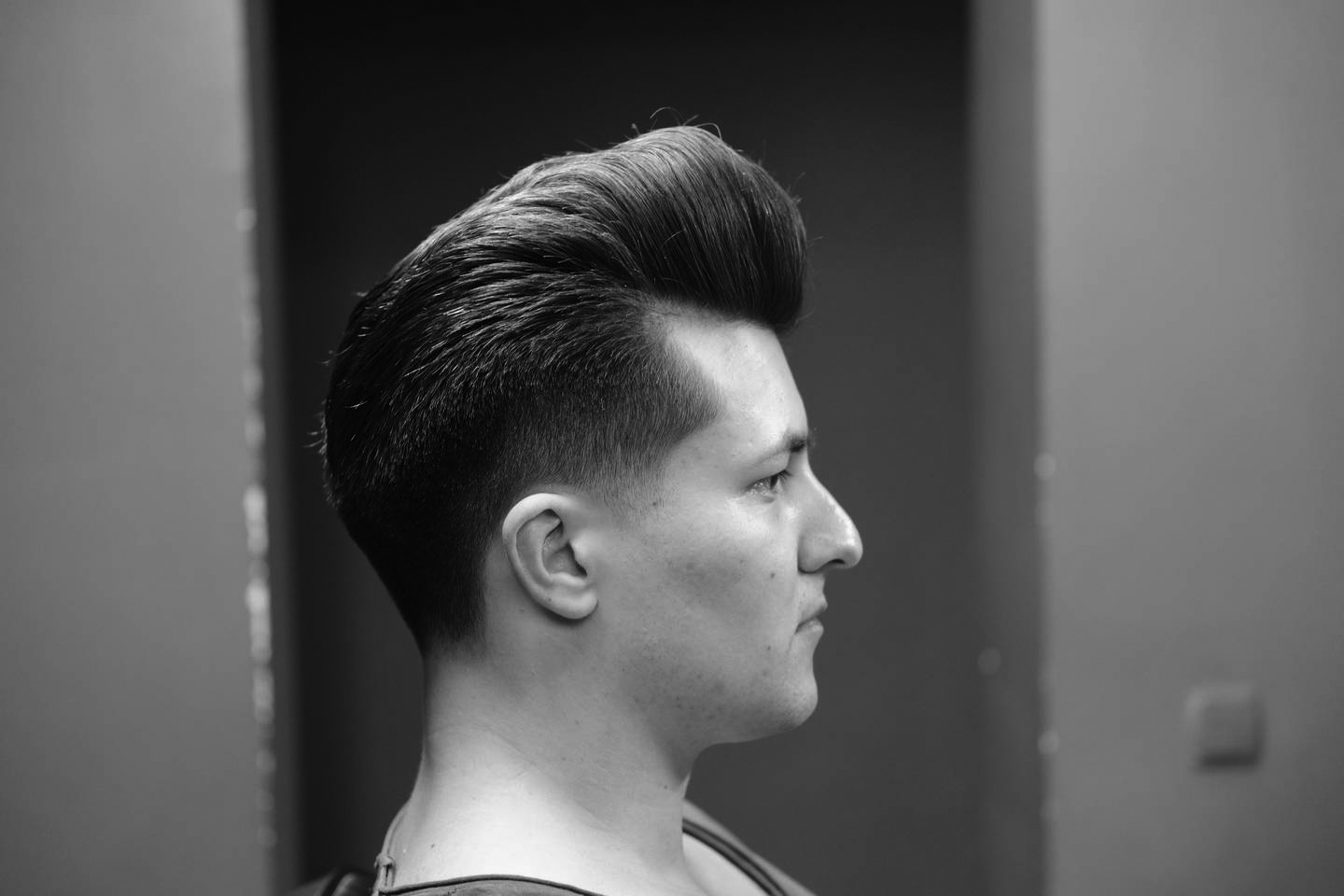 TECHNIQUE OF THE HAIRCUT

Fashionable haircuts for guys such as pompadour are made quite easily. The question is another: to make it hold on, it is important to have a responsible approach. Fundamentals of the haircut are in the sense that they are right in the frontal area and at the same time lifted. The temporal and occipital areas are shaved or clipped. Classically, these are men’s haircuts with parting, but you can ask the master to do without it.

At the time of the appearance of Pompadour, in the 50s, styling was worn differently. The dude’s haircut was called “Kok”. Such haircuts were worn by Johnny Cash and Elvis Presley. You can often hear that the pompadour is called Presley’s hairstyle.

Men’s hair pompadour, like the rest haircuts, requires a procedure. First, wash your hair thoroughly. It is better when quality cosmetic products are used. As a rule, hairdressing use shampoos of famous brands, for example, MUEHLE. In addition, it is suitable professional shampoo DAILY PROTEIN BAXTER OF CALIFORNIA. You can buy these funds through our online store FIRM Store.

After washing, the hair is dried, and then the pompadour haircut is laid. Begin to cut off the hair on one of the temples, then move on to another. Use the machine, scissors and trimmer. Then shear strands in the back of the head. Further, the hair in the central region is divided into two parts: the back of the head and the crown. First, make out the crown area. At the same time, they ensure that the same transition between long and short strands is observed everywhere. Symmetry is our everything.

After processing the neck, the hair lifts up and combed back. How to make a hair pompadour independently, the master can tell you, but it is better if he cut it. After all, the master is a professional and will not spoil anything.

The final touch – fixing styling. Here, too, use branded cosmetics: creams, gels, clays, lipsticks for styling. For example, use the available HARD CREAM POMADE BAXTER OF CALIFORNIA or IMPERIAL BARBER PRODUCTS pomade. Products are suitable for daily usage and provide a strong fixation. In its production used only natural ingredients, so you can not worry that the frequent use of harm. With similar products, it is easier to model fashionable hairstyles on the side of men than women.

So that there is no communication with the master, you can show him a photo of the desired hairstyle. 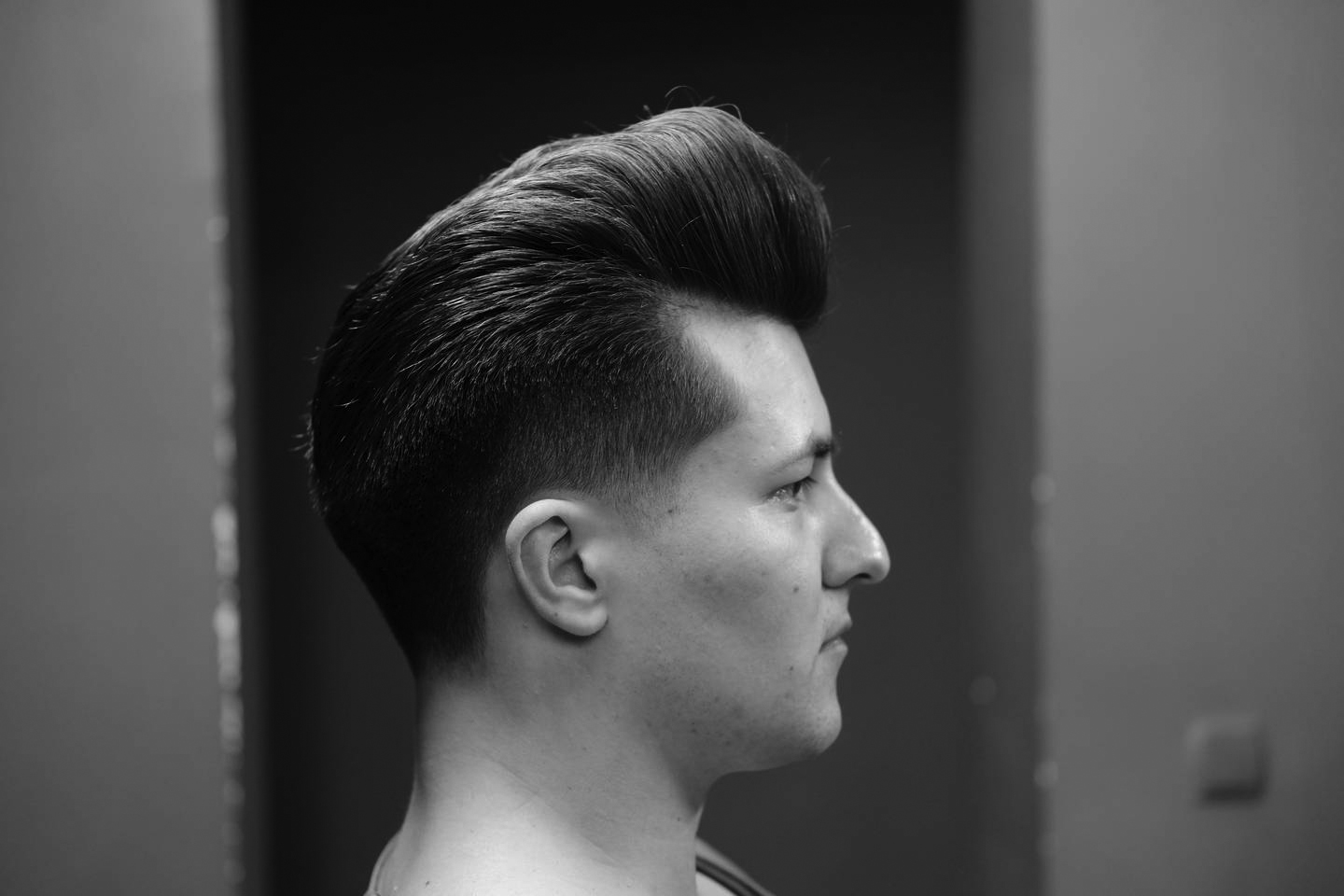 It is easy to put the hair in the pompadour hairstyle, but it is necessary to carry out this procedure every day. Firstly, the hair is combed in front, then – laid back. In this case, a comb should be formed.

If you think what kind of hairstyle can be made in a barbershop, then the best option is a pompadour + wet strand effect. The main thing is to take the right tool for laying. In the FIRM Store in Kyiv, there is IMPERIAL BARBER PRODUCTS cosmetics, SOFT WATER BAXTER OF CALIFORNIA and PLIABLE CLAY PALL MALL BARBERS.

Now you know how to make a male styling.

There are different options for Presley`s hair. The variety of installation allows owners to change constantly. You can make yourself one look, and after a month – the second. It is considered to single out such options:

In addition to the above, there is another version – men’s hairstyles for medium hair with combing to the side. When creating such haircuts, you need to take into account the nuance – the ability of the tuft to visually increase the growth of a man. For men of short stature is ideal. Although, it is better to find a hairstyle for unruly male hair than a pompadour is unlikely to succeed. 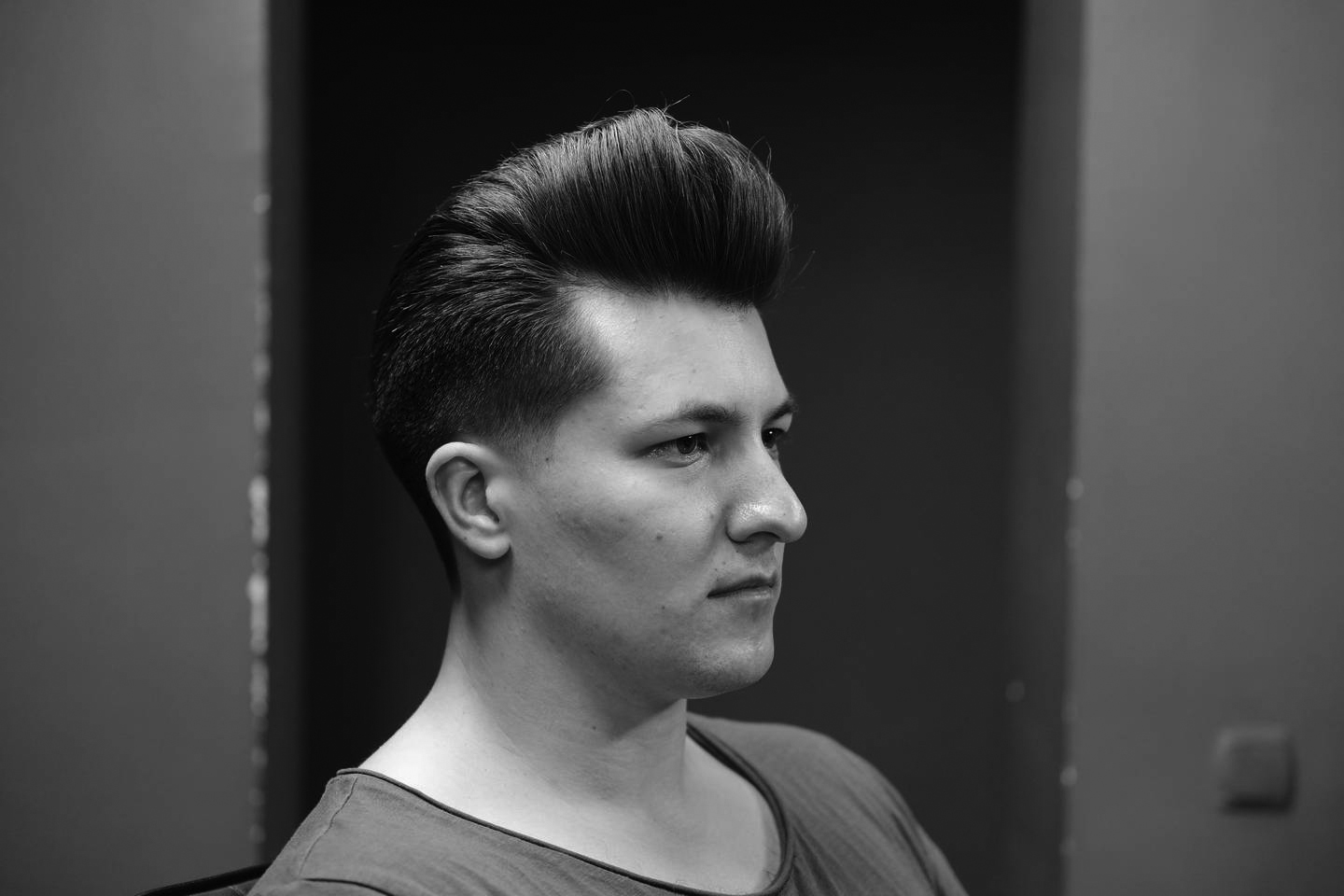